In another Islamophobic incident in France, a cross and anti-Islamic slogans were inscribed on the walls of three mosques.

The walls of the mosques, affiliated to the Turkish-Islamic Union for Religious Affairs (DITIB), the largest Turkish-Muslim association in the country, were defaced in Montlebon, Pontarlier, and Roubaix provinces of France late Saturday.

“We condemn the ugly attack on our mosques and wish our community well,” DITIB said in a statement. “We thank the security forces and the French authorities for their cooperation and the French people for their support.”

It added: “We call for unity against actions that aim at harming peace in the country. We request you to be discreet about such provocative events.”

The number of Islamophobic incidents in France rose sharply last year. According to the National Observatory of Islamophobia, there were 235 attacks on Muslims in France in 2020, up from 154 the previous year, a 53% jump. Most of the attacks took place in the Ile-de-France (greater Paris), Rhones-Alpes and Paca regions of the country. Attacks on mosques jumped 35% in the same year. 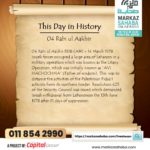