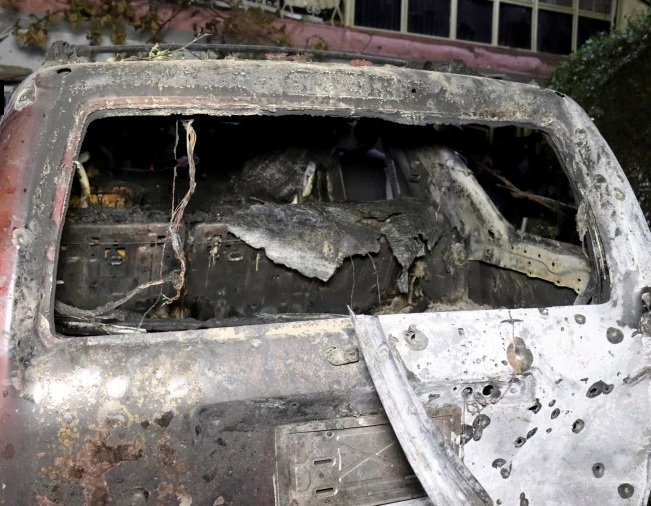 Several children have been killed in a US drone attack that destroyed a car laden with explosives near the international airport in Afghanistan’s capital, Kabul, according to witnesses.

At least three children were among the six civilians who died in Sunday’s attack, witnesses told Al Jazeera.

The United States’s Central Command (Centcom) said it was aware of “reports of civilian casualties” following the drone strike, which it claims hit “multiple suicide bombers” who were preparing to attack the ongoing evacuations at the Kabul airport.

The Centcom said it had launched investigations.

Sunday’s attack was the second one carried out by US forces in Afghanistan since a member of the ISIL-affiliated Islamic State in the Khorasan Province, ISKP  (ISIS-K) detonated his explosives at the airport on Thursday, killing dozens of Afghan civilians trying to flee the Taliban-controlled country.

Thirteen US troops were among the 175 victims.

A senior US official told the Associated Press (AP) news agency that Sunday’s attack was carried after individuals were seen loading explosives into the boot of a vehicle parked in a residential compound near the Kabul airport. The US military drone fired a Hellfire missile at the car.

The official, who spoke on the condition of anonymity, said two ISKP members who were targeted were killed.

The Centcom said it was still “assessing the results of this attack, which we know disrupted an imminent ISIS-K threat to the airport”.

It claims the destruction of the vehicle resulted in “substantial and powerful subsequent explosions”, indicating a large amount of explosive material was stored there.

The secondary blasts “may have caused the additional casualties,” the Centcom said, adding: “It is unclear what may have happened and we are investigating further.”

In Kabul, witnesses reported a large blast shaking the neighbourhood where the vehicle was parked and television footage showed black smoke rising into the sky.

Dina Mohammadi told AP that her extended family resided in the building and that several of them were killed, including children. She was not immediately able to provide the names or ages of the deceased.

Ahmaduddin, a neighbour who goes by one name, said he had collected the bodies of children after the attack, which set off more explosions inside the house.

The CNN broadcaster, meanwhile, reported nine civilian casualties, including six children. It said all nine victims were members of one family.

The Centcom said it “would be deeply saddened by any potential loss of innocent life”.

The group, which claimed the suicide bombing at the Kabul airport on Thursday, has previously carried out bombings mainly aimed at Afghanistan’s Shia minority, including a 2020 assault on a maternity hospital in Kabul that killed women and newborns.

The Taliban have fought against the ISIL affiliate in the past and pledged – during negotiations with the US last year – not to allow Afghanistan to become a base for “terror attacks”.

The US, which invaded Afghanistan following the September 2001 attacks, is due to pull all of its troops out of the country on August 31.

Along with its allies, the US has airlifted more than 114,000 Afghans and foreigners since August 15, when the Taliban took over Kabul.