Hundreds of members and supporters of a muslim group, including its influential leader, have been arrested in Bangladesh over the past week, officials said, over deadly protests against the visit of Indian Prime Minister Narendra Modi last month for the country’s golden jubilee celebrations of independence.

The protests across several districts in Bangladesh were mostly led by the Hefazat-e-Islam group, whose members accused India’s Hindu nationalist leader of stoking religious polarisation and discriminating against minorities, particularly Muslims, in his country.

At least 13 Hefazat supporters died in police firing during the days-long demonstrations against Modi’s two-day visit as they attacked a police station and other government buildings, and blocked highways elsewhere in the country.

In the capital Dhaka, they clashed with police outside the country’s main Baitul Mukarram National Mosque during the visit.

Haque, 47, faces charges of instigating violence but police did not provide details on specific cases or whether the charges stem from Modi’s visit.

“We will investigate all allegations against him since Haque is accused in a number of cases related to inciting violence,” Rashid told reporters.

A further 298 Hefazat members and supporters were arrested in the eastern rural district of Brahmanbaria where anti-Modi demonstrations were also held, police said on Sunday.

Hefazat spokesman Jakaria Noman Foyezi told AFP that 23 leaders of his organisation had been detained by police, calling the police claims against them “false and fabricated”.

In a speech to Bangladesh’s parliament earlier this month, Hasina warned the group and its leaders they would face consequences if they continue to resort to violence.

Haque and his associates led a recent campaign against building a sculpture of independence leader Sheikh Mujibur Rahman, Hasina’s father, saying sculptures are unIslamic. The government backed off.

Founded in 2010, Hefazat is Bangladesh’s largest muslim outfit and draws its support from millions of students and teachers in thousands of religious schools in the Muslim-majority nation.

Although the organisation says it is not a political party, it has gained eminence after the fall of Jamaat-e-Islami, Bangladesh’s largest Islamist political party.

Hefazat leaders in their sermons regularly talk about the country’s politics, advocating an Islamic revolution in the nation of 160 million people.

Hefazat-e-Islam also wants Hasina’s government to enact blasphemy laws, under which anyone convicted of criticising Islam’s prophet would face the death penalty. 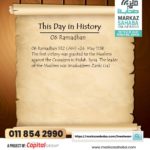