A group of Egyptian architects has won a global United Nations competition for the bid to reconstruct Mosul’s Great Mosque of al-Nuri, which was destroyed by the Islamic State (IS) group in 2017.

Unesco announced, in a statement on Thursday, that the Egyptian team of eight – four partners and four architects – won the competition out of 123 entries.

“They scooped the award for their imaginative reconstruction of Al-Nouri’s prayer hall and complex – and for the way it blends into its surroundings through open public spaces,” the UN agency said.

Unesco launched the design competition in November in close coordination with the Iraqi Ministry of Culture and the Iraqi Sunni Endowment.

The Great Mosque was destroyed, along with several other key heritage sites in Mosul’s Old City, four years ago, just as Iraqi forces made a final push to recapture the area.

The battle for Mosul lasted almost nine months and left most of the city in ruins. Thousands of civilians were killed and more than 900,000 people were displaced.

‘Reviving the spirit of Mosul’

Unesco said that while much of the mosque will look as it did before it was destroyed, it will reopen with better natural lighting and more space for women and visitors.

There will also be enclosed gardens inspired by the historic houses and gardens that were located around the prayer hall prior to its 1944 remodelling, Unesco said.  ‘A shadow of its former self’: Mosul Museum and the long road to recovery Read More »

The mosque was named after Nuruddin al-Zanki, a nobleman who fought the early crusaders from a fiefdom that covered territory in modern-day Turkey, Syria and Iraq. It was built in 1172-73, shortly before his death, and housed an Islamic school.

By the time renowned medieval traveller and scholar Ibn Battuta visited two centuries later, the minaret, which was blown up by the IS group, was leaning. The tilt gave the landmark its popular name: the hunchback.

It was built with seven bands of decorative brickwork in complex geometric patterns also found in Persia and Central Asia.

Unesco chief Audrey Azoulay called the reconstruction of the mosque “a landmark moment” in restoring the war-torn city’s “fabric and history” while helping “reconciliation and social cohesion”.

“Heritage sites and historical monuments are powerful catalysts for people’s sense of belonging, of community and identity. They are key to reviving the spirit of Mosul and of Iraq as a whole,” she said. 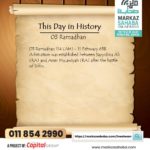